We’ve made a slight change to the way messages are sent with the Messaging Module.

Previously the module always sent one copy per user per proposal. Unfortunately that could be confusing if an individual had more than one proposal because someone could receive multiple copies of the same message and not understand why.

The module continues to send one copy per user per proposal, but only if the message contains proposal-specific merge fields, like the proposal ID or title. That way, if someone receives multiple copies it should be clear which proposal each copy is for. If, however, the message does not contain proposal-specific merge fields, then the module sends just one copy per user, regardless of how many proposals that user is associated with.

To help understand the change, here is an example: Mary is associated with two proposals. In one she is a speaker and in the other she is both a speaker and the primary contact. You set up a message to go to all speakers and primary contacts for all proposals. If the message includes proposal-specific merge fields (e.g. the proposal title) Mary will receive two copies (one copy per proposal). Otherwise, she will receive just one copy.

We’ve also made a slight change to the module’s interface (right). When you are editing a message, the module still provides a count of how many messages will be sent but now that number is an active link to a popup that displays the full list of recipients. (BTW, the screenshot shows 19 copies for 21 draft proposals because the message does not contain proposal-specific merge fields. That means only one message is sent per user, regardless of how many proposals each user created. In other words, 19 users created 21 proposals. If one or more proposal-specific merge fields were added to the message body, the number would increase to 21, or one copy per proposal.)

The Messaging Module now includes a feature that allows call admins to view the list of recipients for a message before the message is sent!

Just create your message like you always have. When you go to preview the message, you’ll see a link at the end of the "To" header (right) indicating how many messages will be sent. Click that link and a window will open with a list of the recipients and how many copies each will receive. (Recipients receive one copy per proposal, so someone with multiple proposals would receive more than one copy of the message.)

The link is also displayed for draft messages on the main Messaging Module page.

After a message has been sent, the link is replaced with a list of actual recipients and the delivery status for each one.

We’re improving the layout of the review page to make it easier than ever to review proposals in ProposalSpace!

Starting Wednesday, July 11, reviewers will no longer see each proposal’s contents displayed in tandem with the review form. Instead, the two will be side-by-side. In case you’re wondering what that looks like, here’s a comparison of the old and new layouts. (Click on a layout for a larger view.)

And here’s a larger view of the new layout with details about specific improvements: 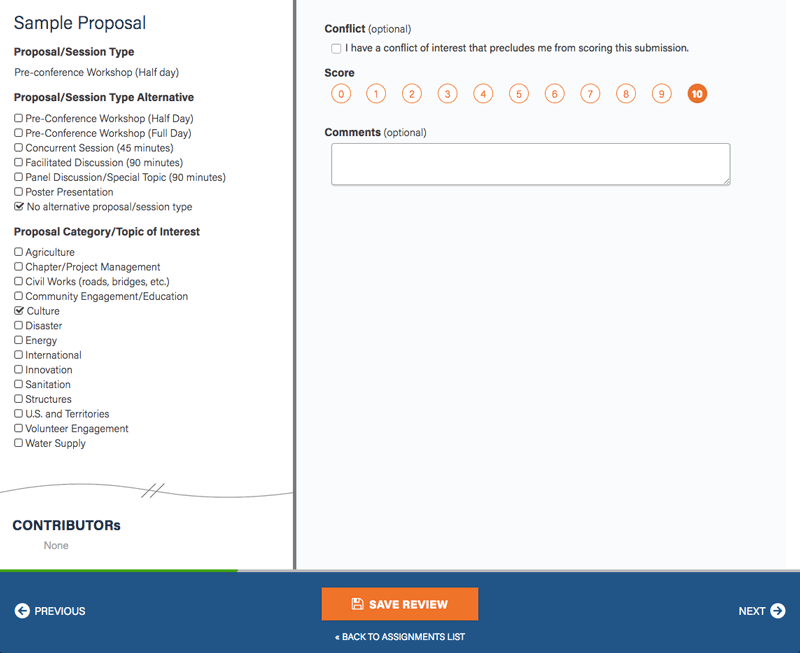 We hope the new layout and functionality will make it even easier for reviewers to complete their work. If you have any suggestions for improvement, please don’t hesitate to contact us or leave a comment below!

Previously, every call had to have a submission deadline, which was OK for most calls. However, for open-ended calls, that date had to be set way in the future or updated periodically to keep it in the future. So to make things easier, we’ve made the Submission End setting optional, which means any call can now be open-ended just by leaving that setting blank!

To get this to work, we had to make a few other notable changes:

We really hope these changes make it easier for admins to manage open-ended calls using ProposalSpace. As always, feedback is welcomed.

More exciting changes are in the pipeline, so stay tuned!

If you’re a call admin, the next time you go into the general-settings area for your call you’ll see a new field (labeled “Public Description”) that you can use to customize the text that gets displayed on the public call-details page (aka the call landing page).

Note: This feature has been removed. See our post explaining why.

One of our users recently reported a problem with the way our data-export tool was handling special characters. Abstracts for his call often contain mathematical symbols, which were being displayed correctly on the ProposalSpace website, but were becoming garbled in the output file generated by the data-export tool. For example, Δ (delta) was showing up as Î” and ± (plus-minus) was showing up as Â±.

(A special note: Some programs, like MS Word, might ask what encoding to use when opening the file. If that happens, select “Unicode” on Windows or “Unicode 6.3 (Little-Endian)” on Mac.)

Also, we’ve removed the “strip HTML” option from the data-export tool and made that the default action. If you miss having that option, just let us know and we’ll be happy to put it back!

The data-export feature now has an option for controlling how HTML-formatted text is exported. You can find it on the data-export page (Tools -> Data Export) right above the Create Report button:

For example, let’s say you have a field in your Presenter role form for the presenter’s bio. You’ve set up the field so the user can format the text, but you don’t want any of that formatting when you export the bio. Now, all you have to do is check the box at the bottom of the data-export feature and voilà—all of the HTML code is stripped out!

We’ve just released some exciting improvements to the data-export feature in ProposalSpace!

All of these changes were in response to feedback from our fantastic users. Keep the ideas coming!

We’ve just released a new dashboard for the Session Tracker in ProposalSpace. The dashboard contains a couple of charts designed to help call admins track proposal activity over time and to monitor how many draft proposals are incomplete vs. complete. It also contains an Alerts section that displays issues that might require attention, like impending deadlines, submissions that haven’t been approved for review, and submissions that need to be assigned to reviewers.

The idea is to make the Tracker Dashboard a place where admins can stay on top of every aspect of a call. We’re always looking to make the feature more useful, so if you have any information that you would like to see on the dashboard, please let us know!